It’s official, well almost official, I’ve chosen and I think I’ve chosen wisely.  After test driving the Ford Escape, The Honda CRV, The Nissan Xterra and the  GMC Terrain, it was pretty clear who the winner would be.  The Terrain won out in terms of comfort and ride. It also just looks way cooler than the other vehicles and let us not underestimate the importance of that.  I think the thing that really tipped the scale in the Terrain’s favor was the On Star system, there really is nothing else like it out there.  At the push of a button you are connected to a real human person who can help with directions, help you find the nearest diner when driving through the hinterlands of Iowa or send assistance whenever you need it.  I like the idea of having someone on standby “just in case”

I also felt that given the Americana theme of what I’m doing an American car was the way to go.  Somehow driving into Little Rock in a Hyundai just doesn’t fit the image I have in my head.  I’m picking it up next week so I can practice driving it around locally before the real launch, it will be like a show in previews.  Having spent the last 22 years relying primarily on the subway to get me around, I think I should take a few weeks to break in my new ride.  The gas pedal is the one on the right yes? 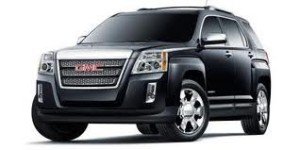