How is it possible that I’ve never been to Quebec before?  It’s an incredibly beautiful place that makes you  want to wander around for hours and hours at a leisurely pace just soaking in all the city has to offer,  and it has a lot to offer!  There are great museums, wonderful little art galleries, a beautiful port area called Vieux-Port, the old city, the Citadelle,  parks, churches and magnificent architecture everywhere you turn.

I stayed at Le Chateau Frontenac a truly amazing hotel.  Aside from being incredibly beautiful the hotel has some serious history that goes along with it most notably,  the Quebec Conference was held there in 1943.  The Quebec Conference was where the D-Day invasion of Normandy was planned by Winston Churchill and Franklin Roosevelt.  One of the hotel staff told me that all of the guests were asked to leave the day they arrived. No reason was given other than that it was ” A matter of national security”.

The hotel is right smack in the middle of the city and surrounded by so many of the interesting districts:  Quartier Petit Champlain, Vieux-Port and Vieux Quebec. Everywhere you turn there’s another beautiful church or charming little street, an interesting museum or some incredible art gallery. Two of my absolute favorite galleries were Gilles Bedard located at 133 rue St-Paul, the gallery features the paintings of  Gilles Bedard (here are some examples of his work) and his daughter Genevieve Bedard.  My absolute favorite  painting that I saw the entire weekend was by an  artist named Kal Gajoum. The piece is called  Champs Elysees Traffic His work and the work of many other talented artists can be seen at Les galeries d’art Beauchamp 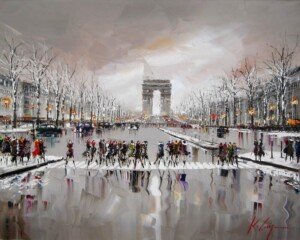 Luckily for me there were several amazing exhibits on at the museums. The first one worth mentioning is the Rome exhibition at the Musee De La Civilisation.  The permanent collection was just OK but the Rome exhibit was really impressive. The other museum that was just amazing is the Musee national des beaux-arts du Quebec.  Their permanent collection is really fantastic. They also have a special exhibition running by Napoleon Bourassa.

Below is a brief description from the museums’s website:

An architect, painter, sculptor, art theorist and critic, teacher, lecturer, novelist and musician, Napoléon Bourassa (1827-1916) left his mark in many areas of Montreal’s cultural life. But during his lifetime he was overshadowed by such powerful names as Louis-Joseph Papineau (his father-in-law), Henri Bourassa (his son), Théophile Hamel (his teacher) and Louis-Philippe Hébert (his pupil). Today, he is rightly considered one of the leading Canadian artists of his time.

In 1941, a generous donation by the Bourassa estate made the Musée national des beaux-arts du Québec the main repository of the artist’s work, holding close to 400 items. The exhibition, which includes more than a hundred works, covers all facets of his long career and richly varied production. Due to the show’s extended run (nearly a year), all of the drawings will be changed halfway through, bringing the total to some 175 exhibited works, in addition to a wealth of archival material and photographs.

Now one of the things I really needed to try in Quebec was something called “poutin”.  It’s  a very unusual concoction that’s beloved in Quebec.  During my first visit to Ashton I tried it the way everyone else did:  french fries with brown gravy, chewy cheese curds and a sliced hotdog–it was revolting!!  Well if you take off the cheese and the hot dog, its french fries with brown gravy and that doesn’t suck at all.  I visited Ashton three times while in Quebec, the first one was mid-day and the other two were late evening/early morning visits after nights out on the town, guess which times it tasted better!

The Evolution of Poutin 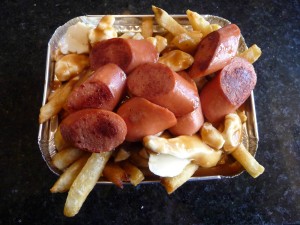 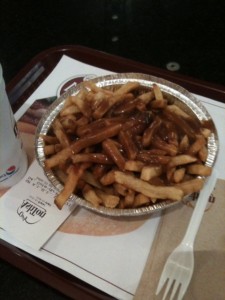 Poutin With Just The Fries And Gravy 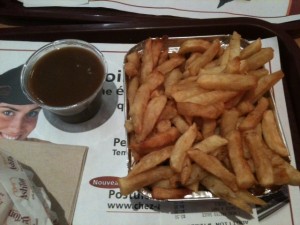 Third Time Was The Charm-Fries With Gravy On The Side. Perfection!

In addition to wandering for hours upon hours, visiting museums and galleries there were a few other activities as well.  The concierge at the Fairmont hooked me up with an amazing spa called Abysse where I had an incredible massage. This however did not relax me enough to sit through the Mario Pelchat concert at The Capitol Theater.  Wow it was awful!  If Tom Jones and Maude Maggert had a love child it would be this guy. The only difference is they’re talented this one, not so much. Apparently I was in the minority here as the audience seemed to love him. I thought maybe the not understanding French thing was the problem, but when I asked a few people later on, they kind of turned their noses up and said “Why did you go see him”  Yikes

I also had great evening outings on Saturday and Sunday in Quebec thanks to Phil and Ben (that’s them below aren’t they the cutest couple!) 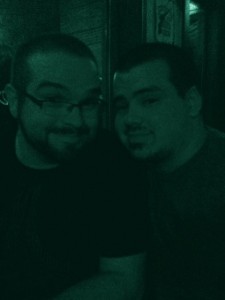 Such nice guys who really made my visit to Quebec special. On Saturday night we went to the only gay boy club in town Le Drague where we had lots of beer and danced the night away. Sunday night was a lot of fun too, more relaxed than Saturday but still a good crowd and everyone was really friendly.  Thanks boys!  OK enough with the commentary time for the pictures. 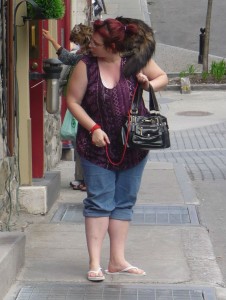 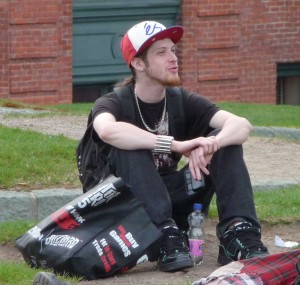 What's He Thinking About? 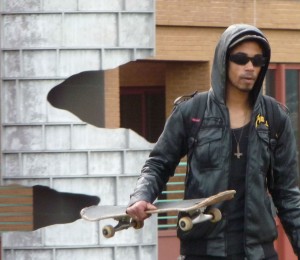 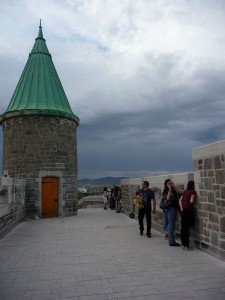 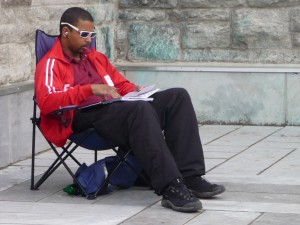 Too Skool For Kool 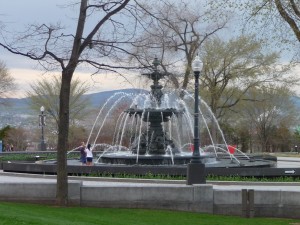 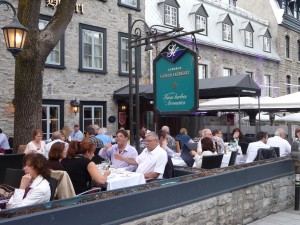 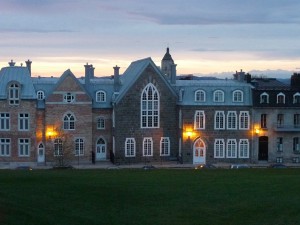 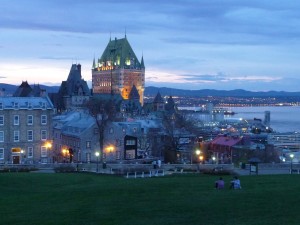 The Most Beautiful View Of Quebec! High Above Le Chateau Frontenac 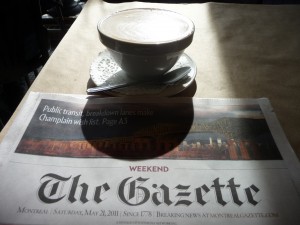 The Morning Light Catching My Newspaper and Cafe Au Lait 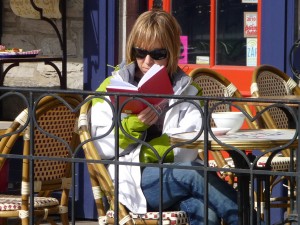 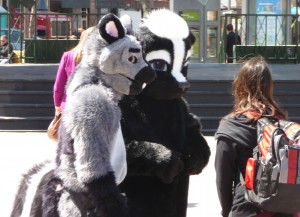 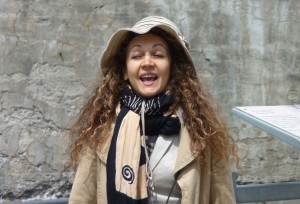 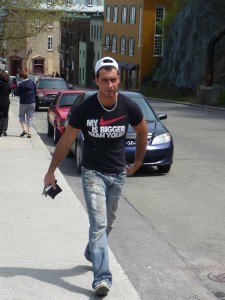 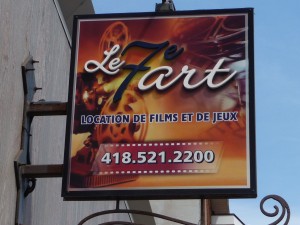 Look Closely It Doesn't Say What You Think It Does 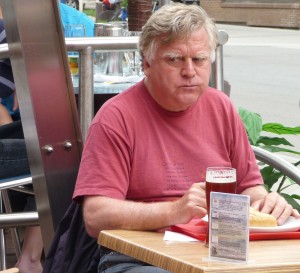 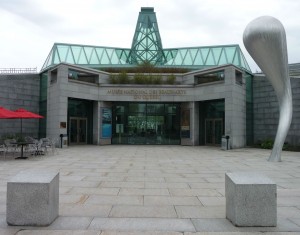 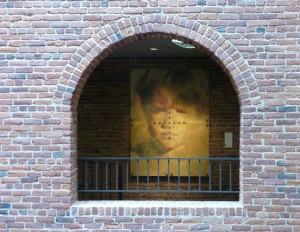 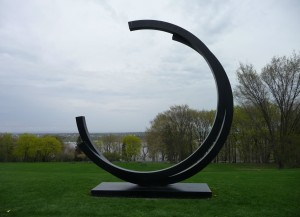