Before I tell you about Da Yoopers Tourist Trap or Da Yoopers Musical Comedy Show I should probably explain what a “Yooper” is.  A Yooper is a person who lives in the Upper Peninsula of Michigan.  They have the reputation of being a little bit red-necky. They like to shoot stuff and drink beer. Not a bad way to spend your time. The residents of the Lower Peninsula are referred to as “Trolls” as they live under the Mackinac Bridge, kinda funny right!

I saw a blurb in my book on Da Yoopers Tourist Trap and thought “hey that sounds kind of fun I should stop there”.  I had no idea what I was in store for or that I was going to get to meet the owner of the most awesomely kitsch place and founder of the Musical Comedy Group  Jim “Hoolie” DeCaire 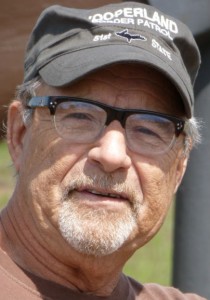 Jim opened Da Yoopers tourist trap in the late 80’s and has been adding stuff to it ever since. There are a lot of roadside attractions in the United States but this is one of the best and funniest I’ve ever seen! Hoolie has a sense of humor for sure!. There are so many fantastic things there that I’m having a hard time deciding what to post but there are a few “musts” for sure. Big Ernie was my favorite! 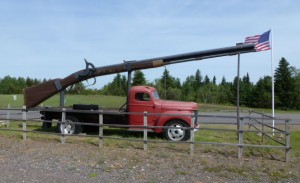 Then of course there’s “Big Gus” the worlds largest chain saw! Ernie and Gus both have the distinction of being in the Guinness Book of World Records 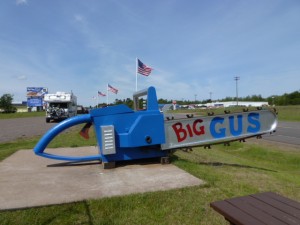 Now the rest of these amazing items are scattered across the property outside the shop. Each one is funnier than the next, so take your time and read what they say you’ll be glad you did! 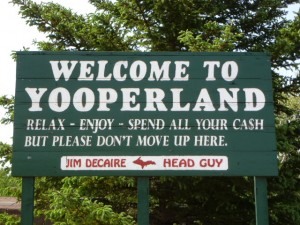 Words Of Advice From Jim 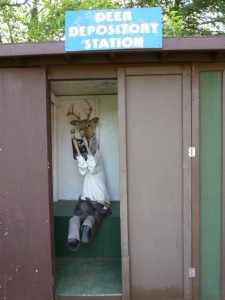 Yes That Is A Deer In An Outhouse 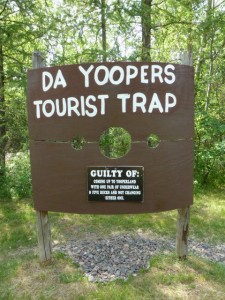 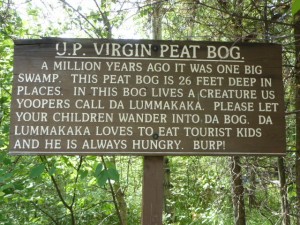 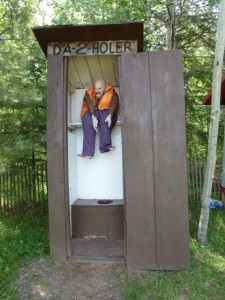 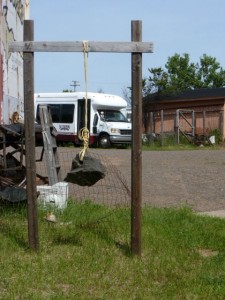 Da Famous Yooper Weather Rock, See Photo Below To See How It Works 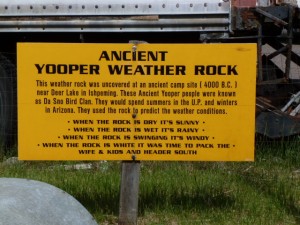 How The Weather Rock Works

These are two of my favorites. The first one is just the cool sign that says ” Stop Here And See How Much Fun You Can Have At A Roadside Attraction That’s Really So Much More” The second one, yes that is me with my head sticking up outta da terlet of an out house– yee haw! 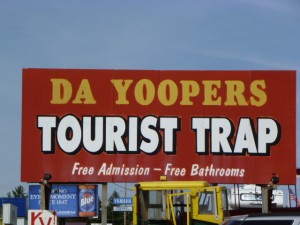 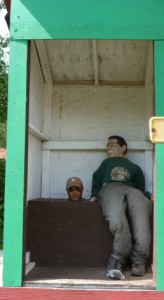 I Think This Is The Literal Meaning Of "A Shithead"

Originally started in 1975 by Jim “Hoolie” DeCaire and Joe Potila as a working dance band, Da Yoopers have been putting a smile on faces all over the world now for over 30 years with their off-beat musical comedy act. Their music and comedy is both a reflection and a celebration of the culture found in one of the U.S’s most unique areas–The Upper Peninsula of Michigan–as well as exaggerating some of the stereotypes that are attributed to the residents of the U.P.
Over the years, Da Yoopers have held fast to a Do-It-Yourself work ethic recording and releasing their own albums and securing national distribution for their label. They’ve proven that through hard work and longevity you don’t need to be located in a large city to become successful in the music industry.

Jim was incredibly nice and gave me a few of the groups CD’s. Some of my favorite tracks are:

Got My Sisu Working

Those are from their CD’s called 21st Century Yoopers In Space (Think Hillbilly Devo) and Songs for Fart Lovers.  Both CD’s are written and produced by Jim “Hoolie” DeCaire and Jim “Bella” Bellmore.  It was a trip meeting both of them. Below is a photo I took of Hoolie and Bella outside “Da Trap” 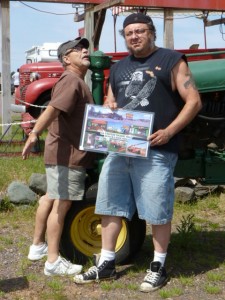 Jim and Jim aka Hoolie and Bella

Now of course I don’t think I’d be doing Da Yoopers justice without a sample of their musical talents and humor. A warning, it’s crude and rude and my guess is girls will think it’s disgusting and boys from 9 to 90 will be laughing till da cows come home. Thanks guys as if I wasn’t having enough fun this past week. If you find yourself in the Upper Peninsula and don’t stop here, well yer just a dumb ass!