WTF (Welcome To Fairbanks) Month One

So I’ve been here about a month now and I’m settling into life in what is becoming an ever darker and increasingly colder spot. I woke up one recent morning in complete darkness at 8:15 AM and the temperature was -9 degrees Fahrenheit in October! Someone used the expression the other day WTF, which stands for something entirely different here than it does anywhere else “Welcome to Fairbanks”. Given the extremes of the place, very appropriate and highly amusing

On the surface, Fairbanks is not an attractive city by any means. It’s a hodgepodge of strip malls, super stores and gas stations.  There’s very little that’s aesthetically pleasing about it.  It also leaves visitors of the tourist variety feeling a little unfulfilled in terms of things to see and do.  So why then would I pick this desolate, ridiculously cold and unattractive place to spend my first Alaskan winter?  A few reasons actually: First of all I never do anything that’s obvious. Secondly, if you dig just below the surface there are lots of interesting things to do here and oh the characters I’ve met and its only October!! I’ve also met some incredibly cool people (pun intended). It takes a special sort to live up here, especially the ones who choose to come up here from the lower 48. They are adventurous of spirit, resourceful, appreciative and aware of their surroundings and more times than not, slightly odd, but in an endearing way.  I would say that describes me as well. I’ve taken to referring to Fairbanks as ” The Island of Misfit Toys”

Some of my favorite things so far:

Creamer’s Field and Wedgewood Resort (where I live) has an extensive trail system right outside my front door. I have a lake to wander around, miles of open trails through the fields and I even have my own boreal forest!

A huge selection of amazingly delicious Thai restaurants. It makes no sense but I’m just going with it.

The Blue Loon out on the Parks Hwy. They have a terrific environment and lots of delicious beer.  They show films (or presidential debates) and you can drink and eat while watching the evening’s entertainment

The Marlin-The hippie, indie, music bar, conveniently located less than three miles from where I live

Giant super store after giant super store!  Walmart, Fred Meyer’s, Sam’s Club, Safeway, Sports Authority, not to mention all of the awesome clothes outfitters like, Big Rays, Prospectors and Beaver Sports.  Coming from NYC having this much space and selection is very entertaining.

Quirky people and random conversations–its one of the things that makes Alaska, Alaska.

My blizzaks–OK I know I’m being a big nerd about this, but it’s kind of exciting preparing my car for winter.  Blizzaks are special tires that people use up here to drive on the ice, they are soft and super-grippy. You also have to “winterize” your car

Time for some photos in no particular order

New arrival to Fairbanks, no snow yet, no winter beard ( pictured with Ben Christian) 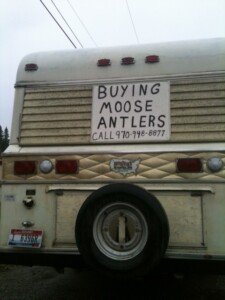 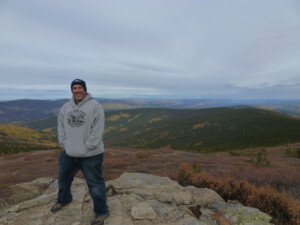 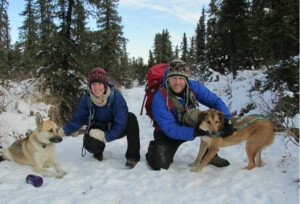 Ben, Faye and the pups (Tuva and Saami) on our hike 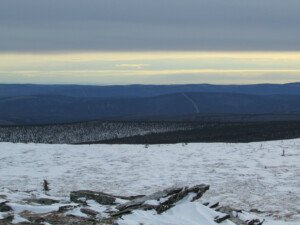 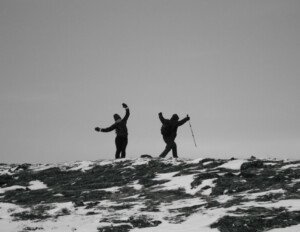 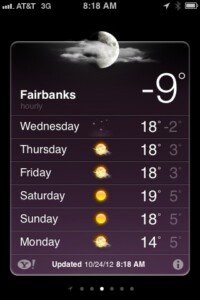 This was the coldest morning so far. You’ll be seeing plenty more of these screenshots as the winter season progresses! 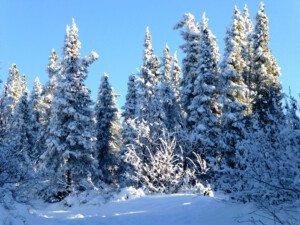 Some shots from our hike on Ester Dome 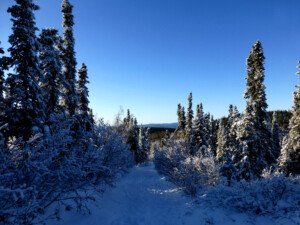 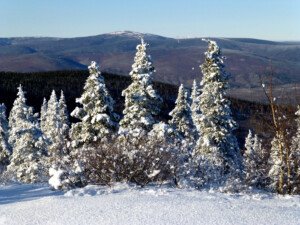 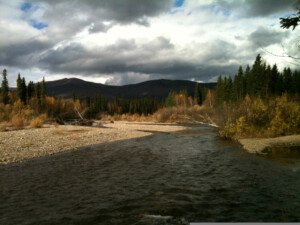 From one of my first solo hikes when I arrived

Cool sign, although any chain that’s up here is probably the “Northern most” in the world!

Driving “Goliath” up on Murphy Dome (OK not really I just posed in it for this picture, it’s a friends truck) 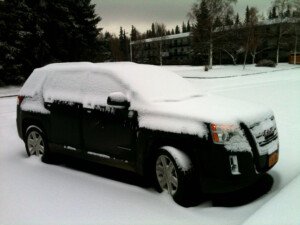 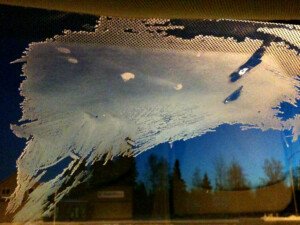 The first night the temps dropped below zero and ice formed on the inside of my windshield! 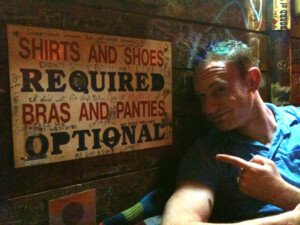 Hanging out with Jay at the Midnight Mine–our new Sunday night tradition. 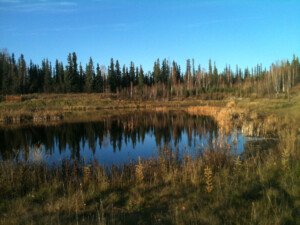 The lake near my apt when I first arrived 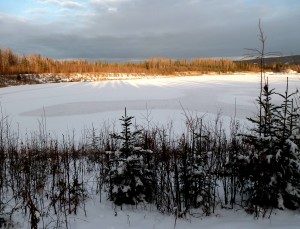 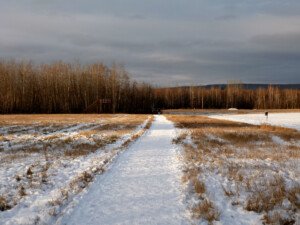 Creamer’s Field, right near my apt 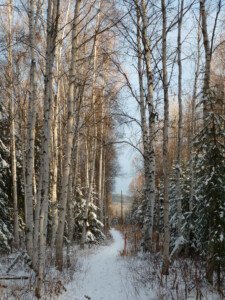 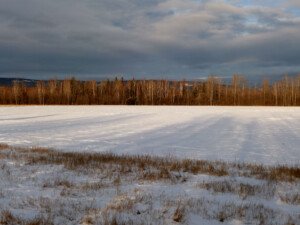 Another shot of Creamer’s Field 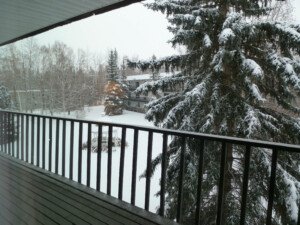 The view from my living room 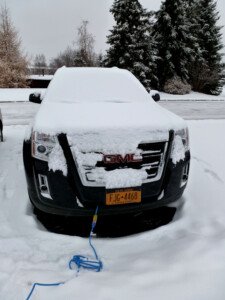 This solidifys my status as a Fairbanks winter resident! So for $600 you get a plug sticking out of the front of your car. On the other side of that plug are heaters on your oil pan, engine block, and two other places I seem to have forgotten. Once the temperature drops to -20 or so you have to keep your car plugged in to keep it from freezing and from other bad things happening to it. It’s not time yet, but just wanted to test it out. That plug goes to the assigned outlet in front of my building and I have a switch inside to turn it on 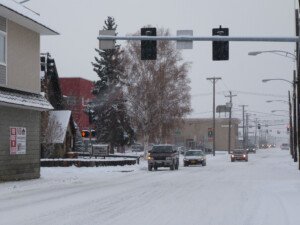 Downtown Fairbanks in the snow 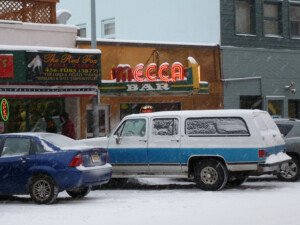 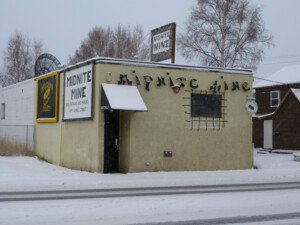 The Midnight Mine, our favorite Sunday night hangout! 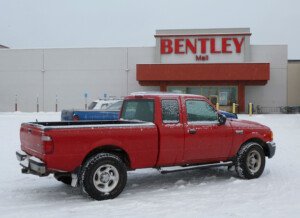 Literally the most pathetic mall in existence, maybe 10 stores in the whole place the best being American Eagle and GNC. I did however like how the color of the truck matched the lettering

This is my face 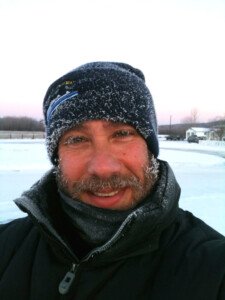 This is my face a week or so later after it froze!

And for the finale, please put your hands together and give a huge round of applause to the Aurora Borealis (photos by Ben Christian) 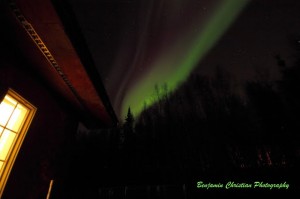 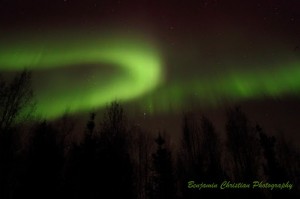 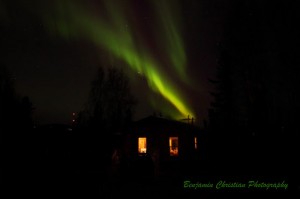