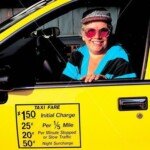 I think of myself as a pretty liberal person.  I believe anyone can do anything regardless of age, sex or education for that matter. So how come I get a sinking feeling in the pit of my stomach at the sight of a girl driving a cab? I know it makes no sense right? Maybe because it happens so infrequently, but when it does I see the driver and there’s a moment of awkwardness “Hey you’re a lady and you’re driving a cab, what’s up with that”?  Then lady cab driver looks at me thinking “Why are you looking at me like hey, you’re a lady driving a cab, I can drive a cab bitch”

The other night I was leaving a dinner party and was feeling a little lazy. It was rainy so I hailed a taxi and sure enough, lady cab driver. I thought about waving her along, but I just couldn’t do it.  She looked really nice and I didn’t want to hurt her feelings.  I got in and we exchanged pleasantries.  I gave her my destination “Horatio and Washington please” plenty of cab drivers take a second or two to figure out the route, but she exclaimed “Where’s that”?  Uccchhhh.  “It’s in the West Village, just below 14th Street; I’ll show you once we get down there”  “OK, how do you want me to go”?  I was coming from the Upper West Side, so I said, “Make a right here and go down Ninth Avenue.  “Where’s Ninth Avenue”?  Wowza, didn’t see that one coming really, where’s Ninth Avenue?

Go down Broadway and when you get to Lincoln Center, bear to the right. “Oh OK, I think I know where that is” I remained calm and just went with it.  My curiosity got the better of me however, “So how long have you been driving a cab”  “A week, but don’t be scared” All of a sudden we were both laughing really hard, what a great answer!  I asked her what made her become a cab driver and without a moments hesitation she said “freedom” Lady cab driver was not only cool and doing this job for an awesome reason, she also drove as well if not better than any cab driver in the city.  It’s that rare skill set of driving fast enough where you’re not sitting in the back of the cab muttering “Come on go around them”  but not so fast that your heart is in your throat, with you going “Hhmmmm do you think you’re playing a video game or do you understand that this is a real cab with an actual human in the back”   Then there are the cab drivers who drive with one foot on the gas and the other on the brake alternating between the two, jerking back and forth so you arrive at your destination ready to hurl.

Lady cab driver rocked it, she zigged then she zagged– no one was messing with her driving mojo.  I gave her some advice on navigating my neighborhood and told her it was OK to go down Washington to Horatio because it was a Monday night, but on Thursday, Friday and Saturday, she should avoid it unless she wanted to watch hundreds of very drunk girls in high heels and tiny dresses stumble across the cobble stones headed to one of the two dozen or so trendy bars/restaurants in this neighborhood.  She smiled and thanked me for the advice.  I gave her a bigger than normal tip, but not so big that she would think, “Oh he’s giving me a big tip because I’m a lady who can drive a cab” and wished her good look with her new career.

Next time a lady cab driver pulls up to take me to my destination; I’ll be a little less apprehensive, now I just have to work on my phobia of male nurses.