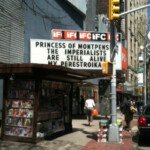 Perestroika’s literal meaning is “restructuring”, so it seems fitting that the film My Perestroika at the IFC Center in The West Village will most likely be the last independent/foreign film I see here for a while. One of my favorite New York rituals for over twenty years has been the Sunday early morning movie outing followed by brunch.  Now very few people know this about me, but I actually single-handedly started the first show on Sunday morning moving tradition, I know hard to believe right, but its true!  Well at least in my mind it is any way.  It was born out of necessity, the necessity to see great films while not being squished in a middle seat in a movie theater with hundreds of other film enthusiasts.  I’m not a huge fan of crowds, which on occasion as you can imagine is a problem for someone who lives in Manhattan, so I’ve always had “work around” options.

After twenty two years of navigating this city I’ve learned a few tricks here and there. One of those tricks, why wait in massive lines on Friday or Saturday night only to see sold out signs when you finally get to the box office window, when instead you can wake up early in the morning, enjoy a nice warm popcorn breakfast, have your choice of seats and when the movie is finished you still have most of the day ahead of you to enjoy. It always seemed like an excellent option to me.

I started going to the Angelika Film Center when it opened in 1989 and have been a loyal patron ever since. At that time my favorite independent movie theaters were: The Angelika, The Film Forum and Lincoln Plaza Cinema.  I have since forsaken Lincoln Plaza, I never really liked the whole set up of that theater, their snacks are just average and it’s rare that you don’t spend a good part of the film listening to hard candies being unwrapped by Upper West Side octogenarians.   No matter how much they deserve it, you never feel good about yourself after yelling at an old person to be quiet, trust me I know from experience.  The Angelika on the other hand has always catered to the younger, hipper crowd, the serious downtown film-goers who wouldn’t dream of talking during an independent or foreign film. More recently, The Sunshine Landmark and the IFC (which was the Waverly Theater for a long time and then just boarded up for years) have hit the scene; both have become fantastic options as well.

I remember how much I loved it when I first started going to independent films, it made me feel all arty and cool.  I saw things like Ju Dou, Raise the Red Lantern, Indochine, Roger and Me, Clerks, Reservoir Dogs, The Kingdom, Do the Right Thing, Pulp Fiction, The Crying Game and Sex Lies and Video Tape just to name a few of the hundreds and hundreds of films I’ve seen over the years.

I’ve always loved the feeling of being all cozy in the movie theatre, sitting where I want and immersing myself in what is probably my favorite form of entertainment, an amazing, thought-provoking film.  The other part of this ritual is, I like to go on my own.  I’ve always felt it’s such a good way to start off a Sunday, see a great film, lose yourself in thought, evaluate it without discussing it with anyone else and enjoy having the opportunity to sit with the film you just saw and soak in its impact.

Now the second part of the Sunday morning ritual, brunch is most definitely much more enjoyable with friends.  I never got a whole lot of takers for the early morning movie thing which was fine by me, but brunch is universally enjoyed by all.  I don’t know a single self-respecting New Yorker who doesn’t love a good brunch. Of course always being slightly left of center, most times I snub my nose at trendy crowded brunch haunts in favor of the more traditional New York Diner. Now there are exceptions to that rule i.e. Five Point’s, Balthazar, Central Park Boat House, etc., however most times the best food at half the price is to be found in your garden variety New York Diner.

So this morning it was a solo outing to see My Perestroika at the IFC, followed by brunch at the Waverly Diner with Scott and Jeff.  I did share the theater with an older Russian couple and another ancient woman, each of us enjoying the film in our own quadrant of the theater. Four seems like the right number of people occupying a theater at 10:55AM to me!

As I prepare to leave for my road trip two weeks from today, I’m really glad to have had the chance to enjoy one of my absolute favorite New York traditions a last time before hitting the road. 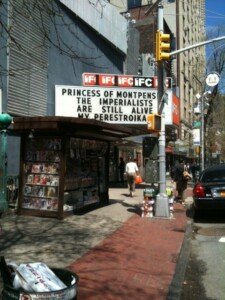 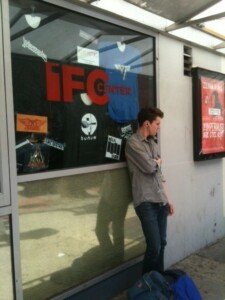 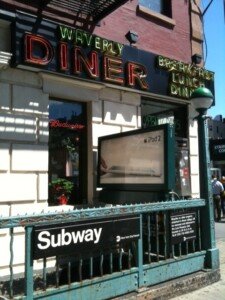 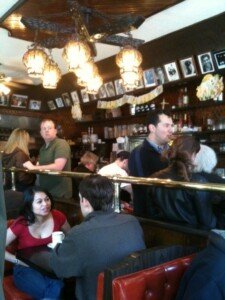 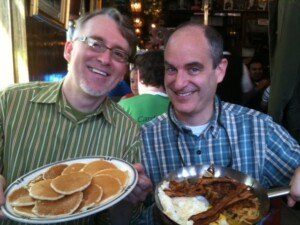 Scott and Jeff Clearly Pleased With Their Brunch Choices!