The Wreck of The Edmund Fitzgerald (Great Lakes Shipwreck Museum)

“The legend lives on from the Chippewa on down of the big lake they call Gitche Gumee. The lake it is said never gives up her dead when the skies of November turn gloomy”

This video tribute is AMAZING !! Of course you can guess what the soundtrack is.

I remember loving this haunting ballad when I was a kid.  We all know the song The Wreck of the Edmund Fitzgerald, by Gordon Lightfoot, but I certainly never knew what it meant when I listened to it growing up.  Even up until recently I knew it referred to a famous shipwreck, but I didn’t know much more about it than that.  A trip to Sault Ste. Marie and the Upper Peninsula of Michigan certainly changed my perspective. Even though The Great Lakes most infamous maritime accident happened over 35 years ago, the story is still a tragic one.

The first known shipwreck of a commercial vessel ironically was The Invincible in November of 1816.  Since then and up to the sinking of the Edmund Fitzgerald approximately 320 lives have been lost in over 300 shipwrecks on Lake Superior.

A visit yesterday to the Great Lakes Shipwreck Museum was such a highlight of my visit to Michigan’s Upper Peninsula.  The museum is located in Whitefish Point, in the remote Northeast corner of the Peninsula on Whitefish Bay.  The Edmund Fitzgerald sank 17 miles Northwest of here (if I heard the very informative and nice woman at the museum correctly)  There’s a huge amount of information about all of the shipwrecks that have happened in this area. This part of the world has become known to many as “The Graveyard of the Great Lakes”

The Edmund Fitzgerald sank on November 10, 1975.  The crew of 29 men all perished and their bodies were never found.

From the Marine Historical Society of Detroit’s Great Lakes Ships

On February 1, 1957, the Northwestern Mutual Life Insurance Company, Milwaukee, entered into a contract with Great Lakes Engineering works for the construction of the first “maximum sized” Laker ever built. The builder laid the keel of Hull 301 at its yard at Ecorse, Michigan, on August 7, 1957, and the vessel was launched on June 7, 1958. On September 22, 1958, EDMUND FITZGERALD was delivered to her owner. She was operated for her entire career under charter to the Columbia Transportation Division, Oglebay Norton Company, Cleveland.

EDMUND FITZGERALD made a name for her self by setting a number of cargo records over the years. She was an extremely handsome boat and was well known to both casual and serious shipwatchers, notably as a result of the antics of her longtime master, Capt. Peter Pulcer, who did his best to entertain anyone who might be watching his vessel.

The only major work, apart from some stiffening of hull members, ever done on the FITZGERALD was the installation of a bowthruster in 1969 and conversion to oil fuel and the fitting of automated boiler controls over the winter of 1971-72.

The EDMUND FITZGERALD is, unfortunately, best known today for the tragic and violent manner in which she met her untimely demise. She cleared Superior, Wisconsin, on her last trip on November 9, 1975, with a cargo of 26,116 tons of taconite pellets consigned to Detroit Traveling down Lake Superior in company with ARTHUR M. ANDERSON of the United States Steel Corporation’s Great Lakes Fleet, she encountered heavy weather and in the early evening of November 10th, suddenly foundered approximately 17 miles from the entrance to Whitefish Bay. Had she been able to manage those last few miles, she would have achieved the safety of calmer waters. All 29 of her crew, including Capt. Ernest McSorley who had commanded her since 1972, were lost and not one body has ever come ashore from the wreck. The broken hull of the steamer was located in 530 feet of water, the bow and stern sections lying close together.

The cause of the sinking is still a matter of controversy but, shocking as it is, the fact remains that the “FITZ” is gone. Her mangled lifeboats, mute testimony to her violent end, can be seen aboard the museum ship VALLEY CAMP at Sault Ste. Marie, Michigan. This was another one of those unexpected finds that I was so glad I discovered.  The Edmund Fitzgerald Captain and the Captain of The Arthur Andresen (the ship that was shadowing the Fitzgerald once they knew she was in trouble) were in constant contact during the storm which produced 30 foot waves and 90 mph winds!

Timeline Of The Event

C.M.: “Anderson, this is the Fitzgerald. I have sustained some topside damage. I have a fence rail laid down, two vents lost or damaged, and a list. I’m checking down. Will you stay by me til I get to Whitefish?”

C.C.: “Charlie on that Fitzgerald. Do you have your pumps going?”

Fitzgerald: “Anderson, this is the Fitzgerald. I have lost both radars. Can you provide me with radar plots till we reach Whitefish Bay?”

Anderson: “Charlie on that, Fitzgerald. We’ll keep you advised of position.”

Estimated between 5:30 and 6:00 PM -The Avafors radios the Edmund Fitzgerald:

Avafors: “Fitzgerald, this is the Avafors. I have the Whitefish light now but still am receiving no beacon. Over.”

Avafors: “The wind is really howling down here. What are the conditions where you are?”

Fitzgerald: (Unintelligible shouts heard by the Avafors.) “DON’T LET NOBODY ON DECK!”

Avafors: “What’s that, Fitzgerald? Unclear. Over.”

Fitzgerald: “I have a bad list, lost both radars. And am taking heavy seas over the deck. One of the worst seas I’ve ever been in.”

Avafors: “If I’m correct, you have two radars.”

Sometime before 7:00 PM – The Anderson is struck by two huge waves that put water on the ship, 35 feet above the water line. The waves hit with enough force to push the starboard lifeboat down, damaging the bottom.

7:10 PM – The Fitzgerald is still being followed by the Arthur M. Anderson. They are about 10 miles behind the Fitzgerald. The conversation between McSorley and the first mate of the Anderson:

Anderson: “Fitzgerald, this is the Anderson. Have you checked down?”

Fitzgerald: “Yes we have.”

Anderson: “Fitzgerald, we are about 10 miles behind you, and gaining about 1 1/2 miles per hour. Fitzgerald, there is a target 19 miles ahead of us. So the target would be 9 miles on ahead of you.”

Fitzgerald: “Well, am I going to clear?”

Anderson: “Yes. He is going to pass to the west of you.”

Anderson: “By the way, Fitzgerald, how are you making out with your problem?”

Fitzgerald: “We are holding our own.”

Anderson: “Okay, fine. I’ll be talking to you later.”

They never did speak later…The 29 men onboard the Fitzgerald will never again speak with anyone outside of the ship.

It is estimated that this was the time period when the ship vanished and sank.

7:15 PM – The Fitzgerald enters a squall while still on Lake Superior; the squall obscures the vessel from radar observation by the Anderson, this is normal when in a squall.

7:25 PM – Edmund Fitzgerald disappears from the radar of the S.S. Arthur M. Anderson

7:55 PM – The Anderson calls again and informs the Coast Guard that they have lost the Fitzgerald both visually and on radar.

In 1995 the Canadian government working with the Great Lakes Shipwreck Museum mounted an expedition to recover the bell from the Fitzgerald. The 15 minute film they show at the museum is superb and I have to say I got pretty choked up watching it!  The bell from the Fitzgerald is on display at the museum.  The part that really got to me was that a replica of the bell was made, inscribed with the names of the 29 crewman and lowered to the site of the wreck allowing it to serve as a permanent resting place for the men lost at sea that day.

After I walked out of the museum I wandered along the shores of Lake Superior watching the freighters go by and wondering how many men ( and probably a few women) have sailed on freighters like these the last 200 or so years.  It was a pretty surreal experience and yes I couldn’t help myself I did listen to The Wreck of the Edmund Fitzgerald on my ipod as I meandered on the lakes edge! 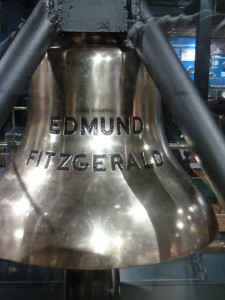 The Original Bell Retrieved in 1995 From The Edmund Fitzgerald 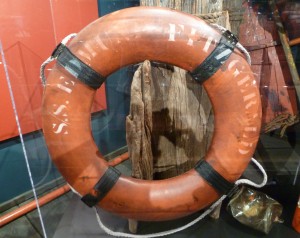 A Life Preserver From The Edmund Fitzgerald 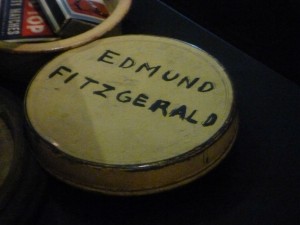 A Tin Of Shoe Polish? Snuff? 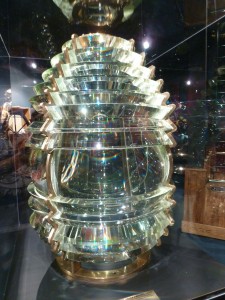 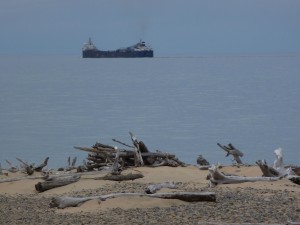 A Freighter On Lake Superior 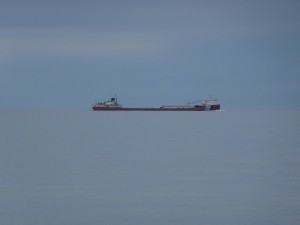 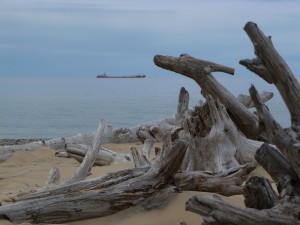 A Freighter Framed By Driftwood 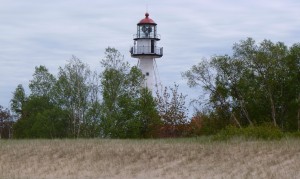 This 150 Year Old Lighthouse Was Knocked Out By The Storm The Night The Edmund Fitzgerald Sunk. They Say It Would Not Have Saved The Ship But You Can't Help But Wonder 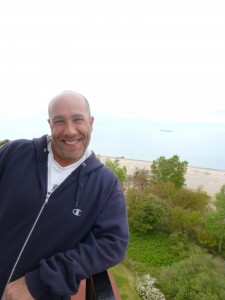 Me High On Top Of The Lighthouse 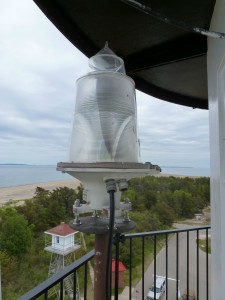 View From The Lighthouse 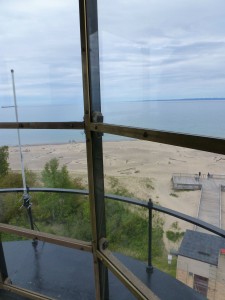 View From Inside The Lighthouse 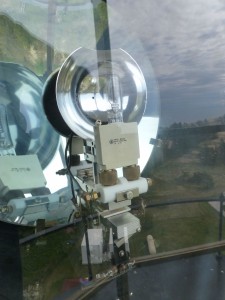 The Light of The Lighthouse Which Was Supposed To Be Working. I Took The Picture And Ran Just In Case it Suddenly Fired Up! 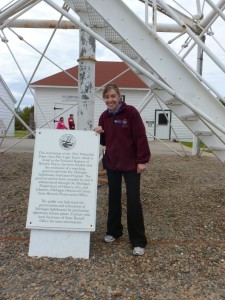 Danielle Works At The Museum ( It's Her Summer Job) And Escorts You To The Top Of The 150 Year Old Lighthouse. Yesterday Was Her Fourth Journey To The Top. They Only Started Letting People Up There This Year Because So Many Visitors Asked. Very Cool Of Them To Let People Climb To The Top! The $4 Charge Goes To Help Restoration 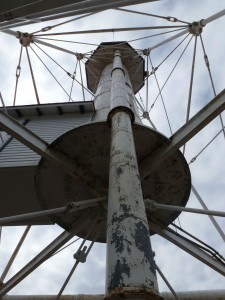 Amazing That This Structure Is 150 Years Old!